Passing Tones is the blog of elements that sound through The Seventh Partita. Items here will be continually updated.

Two Marcos and The Seventh Partita

There are mysterious “coincidences” that sometimes guide us. We need to pay attention to these.

A few years ago I started a novel based on the possibility of there being a seventh keyboard partita of Johann Sebastian Bach. What would it be like to find it? Old and “missing” manuscripts turn up all the time and in this digitally connected world why shouldn’t someone like me find it?

There is a not-so-secret that shows Bach composed seven keyboard partitas in his set that comprises volume I of his Clavier-Übung. But this set contains only six partitas. That there may be an unknown Seventh Partita comes from the simple arithmetic decoding of the known six Partitas: The expanding intervals between each of the preceding six suggest another one in F Major that would complete the sequence. Yet, history has not revealed its existence. Or has it?

Lost works of Bach keep turning up in odd places in odd ways. In 2004, parts of an unknown wedding cantata turned up in Japan in the papers of pianist Chieko Hara who had just passed away. In 1974 a retired music professor found that his early publication of the Goldberg Variations was actually Bach’s own proof copy which contained 14 canons on the theme handwritten by Bach on the end pages. Coincidentally, one of these canons is the one Bach himself holds in the famous Hausmann painting of him.

The contemplation of these made me imagine what it would be like to somehow discover the Seventh Partita—how someone like me could be able to make such a discovery. How could some non-professorial, non-professional musician—a regular guy—make such a grand discovery? It was enough of a contemplation for me to write a novel about it, The Seventh Partita.

The mysterious existence of a seventh partita is compounded by the fact that shortly after releasing the set of six Partitas, Bach released another volume of his Clavier-Übung with yes, another partita. Except it’s in the “wrong” key of b-minor rather than the prophesied F-Major. We now refer to this masterful work as the French Ouverture. There is another work in this volume: The Italian Concerto and that work is in the proper key of F-Major but it’s not a partita at all but of something almost opposite in structure and style. It’s also in a key as distant as one can get from b-minor, a tritone away.

Such paradoxes and ambiguities can be irritating in real life but make for interesting questions in a novel. One of the characters in my novel is a rather unlikable harpsichordist. I pulled a name out of the air: Marco Rico. The name resonates so well with history’s Marco Polo, the explorer (or teller of tall tales), and Rico with the brand of reeds that jazz saxophonists in the ads in Downbeat magazine that my dad used to bring home when I was a kid.

But here’s the strange and bothersome coincidence: While I was contemplating and writing the novel, there was another harpsichordist named Marco, Marco Mencoboni, was releasing videos of Bach’s music. And yes, the very same works: The French Ouverture and the Italian Concerto! To emphasize the difference between the two works he recorded them in different venues. And yet again another coincidence: The venue in the Youtube video for Mencoboni’s performance of the French Ouverture matches the description of the apartment where our protagonist Kaden Oshima lives with his magical Pascal Taskin harpsichord. In Mencoboni’s video, a large window is to his left. In my novel, Oshima lives in a small studio apartment with large glass doors to the left that look out over the city of Honolulu. It’s an apartment I once lived in. The video never shows the view, but it could well be the view of Honolulu from an apartment on Thurston Avenue!

Yes, it may be that I had stumbled on these videos while I was writing and named the character after a residual memory. But on reflection and especially after listening again to Marco Mencoboni’s astoundingly beautiful performance of the missing Seventh Partita (aka the French Ouverture), I am overwhelmed by regret at naming my unfortunate character Marco also.

So I am rewriting the novel and replacing “my” Marco with another name. I don’t know yet what that name will be, but there will be no character named “Marco” casting shadows on any other Marco living or dead.

Only you who are reading this, and a few others that may have read the original draft will know what the character’s name was to begin with.

But enough of this chatter. I leave you with master Marco Mencoboni’s profound and beautiful performance of Bach’s “missing” Seventh Partita. (But maybe there is really another partita that is still missing?) 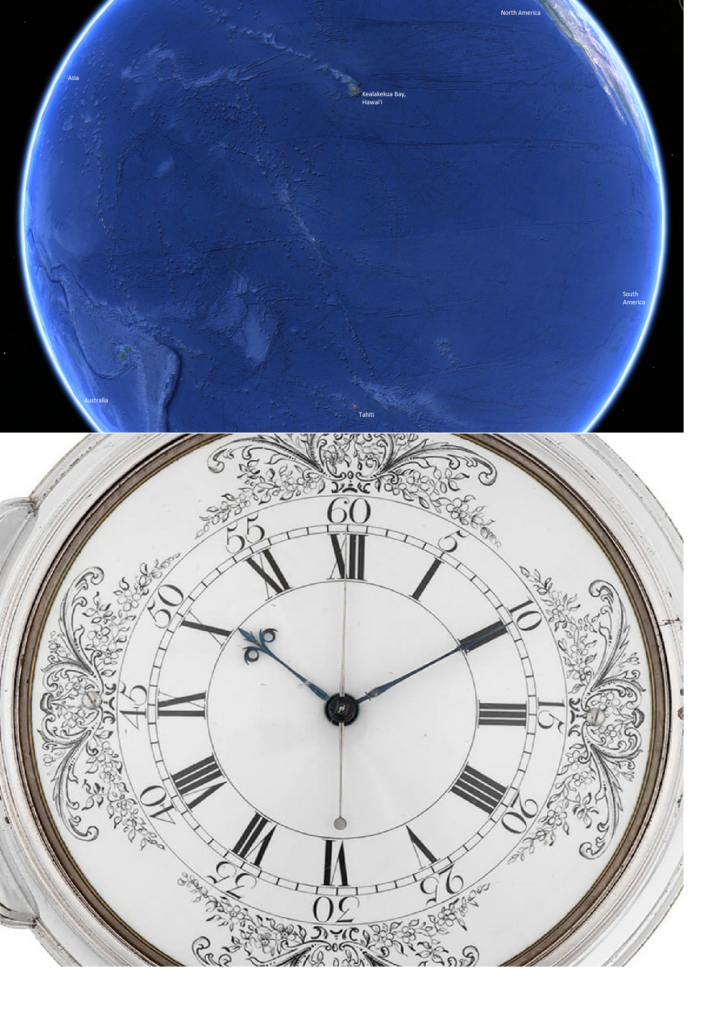 The upper image is of Moana Nui, The Great Ocean, the Pacific Ocean. It’s the largest feature on the face of Earth. Centuries before Captain James Cook met his demise in Kealakekua Bay, Polynesians had been traveling this ocean using star trails and wave patterns. Europeans had developed a gridwork of latitude and longitude for navigation. To establish latitude, an astrolabe would do, and a compass would point the ways to north and south. But longitude was the most difficult problem ever. The maritime empire of Britain established a Board of Longitude in 1714–14 years before James Cook was born–to award a huge prize to anyone who could find a way of establishing longitude accurately.

On Cook’s second and third voyage to the “South Seas,” he had on board Larcum Kendall’s proof replica of John Harrison’s 4th attempt at creating a chronometer that was accurate enough to establish longitude on the high seas. The face of the instrument is shown in the lower image. After Captain Cook died, British ships returned to that little point on the map where he had indicated were the islands of Hawaii. And they did this without the living Captain Cook or his departed spirit to guide them.

Shanghai, China, with 26 million people is the 3rd most populous city on planet Earth. Host to the Shanghai Stock Exchange, one of China’s two stock exchanges with a market capitalization of over 33 trillion yuan (5 trillion US dollars), and home to 46 of the world’s billionaires. As an ancient trading port, it was also home to many people from all over the world. The Shanghai Symphony Orchestra, China’s first symphony orchestra, was founded in 1897.

The second tallest building in the world, Shanghai Tower, rises 2,073 feet from the sidewalk. Its elevators have been clocked at 47 mph, the better to reach up to the 128th floor without too much of a wait. It has its own water and air purification systems, its own trees and parks, its own schools and residences. And yes, its own concert hall.

Thomas Square, Hawaii’s first public park is named after Admiral Richard Darton Thomas of the Royal British Navy who returned sovereignty to Hawaii on July 23, 1843, after a brief British misadventure. It’s across the street from The Honolulu Museum of Art, and the luxury condo named The Admiral Thomas. Recently installed on the south side of the park facing King Street, a statue of Kauikeaouli, King Kamehameha III stands facing the concert hall King Street.

All distances measured from “the corner” at Thomas Square 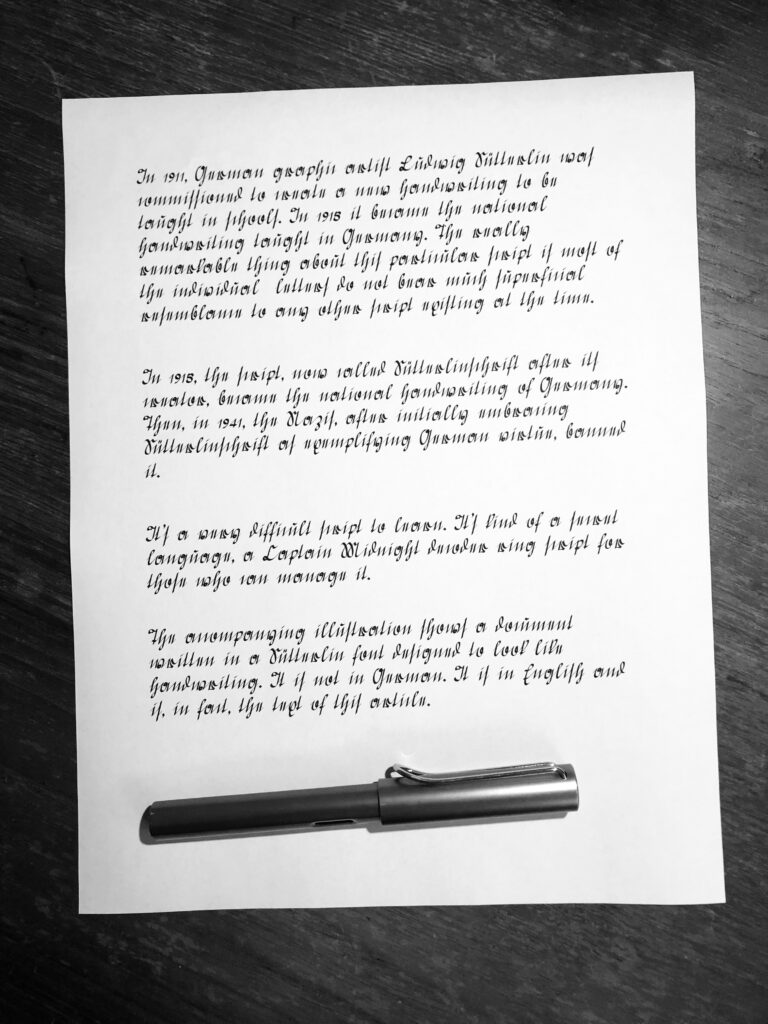 In 1911, German graphic artist Ludwig Sütterlin was commissioned to create a new handwriting to be taught in all German schools. In 1915 it became the national handwriting taught in Germany. The really remarkable thing about this particular script is most of the individual letters do not bear much superficial resemblance to any other script existing at the time.

In 1915, the script, now called Sütterlinschrift after its creator, became the national handwriting of Germany. Then, in 1941, the Nazis, after initially embracing Sütterlinschrift as exemplifying German virtue, banned it.

It’s a very difficult script to learn. It’s kind of a secret language, a Captain Midnight decoder ring script for those who can manage it.

The accompanying illustration shows a document written in a Sütterlin font designed to look like handwriting. It is not in German. It is in English and is, in fact, the text of this article. 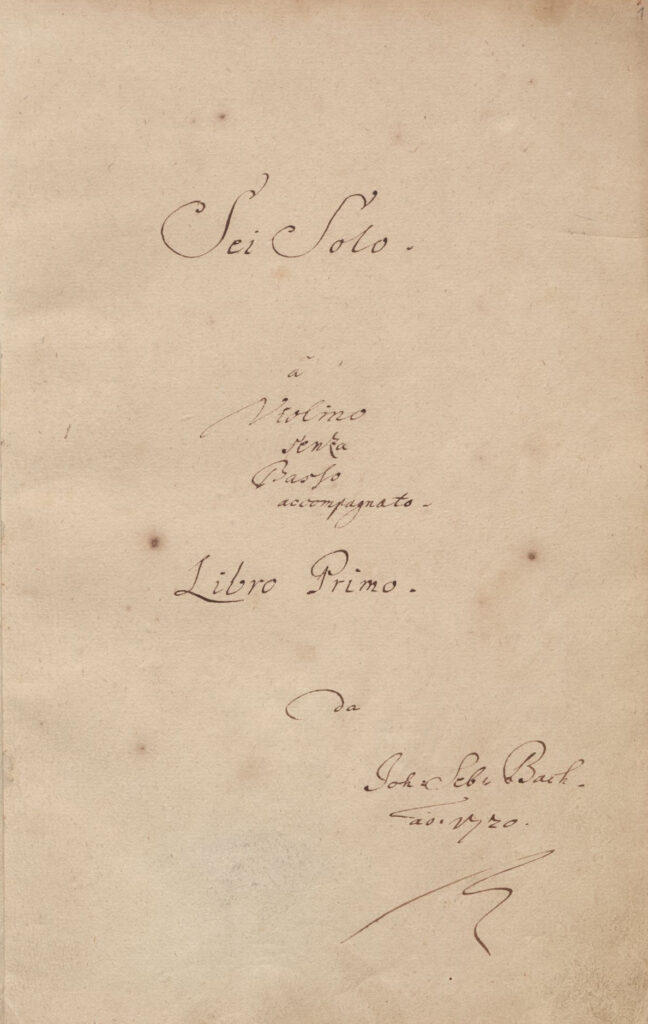 In 1720, Bach returned home after a long road trip to find that his wife had died and had already been committed to the cold ground. Shortly after, he began composing the six suites and partitas for unaccompanied violin. The completed final manuscript in his handwriting is titled, “Sei Solo. Violino senza Basso accompagnato.” Most of us take that to mean in Germanish Italian, “Six solo pieces for violin, without accompaniment.” But in Italian, “Sei solo” means, “You’re alone.”